How to Avoid Getting Trapped in the Trial and Error, Error, Error Cycle [Coaching 02]John Pranjic
Download Audio Subscribe

I recently made a trip to Las Vegas to give a presentation to a group of coaches. The presentation revolved around the idea of Do Less, Not More.

Now, it’s fair to say that every coach goes through a “discovery phase” as they try to find their footing. You know, that phase when you buy a bunch of training books, watch a bunch of videos on YouTube, and try out a new drill every session.

Don’t sweat it! We’ve all been there.

I still have a stack of DVDs, and binders full of crap I’ll probably never look at again.

Going through that discovery phase and how long you spend in it are not the most important parts of your development journey as a coach. It’s what you do after that really matters.

This goes back to the topic of having a vision and having some sort of an idea of how you’d like your team to play.

It takes time to figure that out.

How much time? There isn’t a cookie cutter answer. But you absolutely have to go through that discovery phase.

Once you find your footing, and you have some sort of direction, you have to stay dedicated to bringing that vision to life. That is the most important (and the hardest) part of the process.

When it comes to vision, the example we like to give is this:

Having a vision, or an idea, of how you want your team to play is step one.

It’s a great first step. But honestly, too many coaches that try to venture down this path of becoming a serious practitioner just stop at step one. They think they’ve figured it all out. That’s where so many coaches get trapped.

How many times have you heard a coach say they play like Barcelona? And then you watch their team play and there isn’t even a whiff of anything Barcelona. It looks like straight up kick-ball.

I’ll be generous and say that a lot of coaches do a good job of identifying good role models such as Barcelona, but for whatever reason, they stop there.

Step two is dissecting and deconstructing those teams who you’d like your team to emulate.

To explain this, we’ll use the same examples as before:

After ripping those models apart, your next move should be putting them back together in a way that will help your team.

What does that actually mean?

Based off of those examples you’re following, it means that you should develop or choose a limited number of exercises to use in your own training environment that will bring your vision to life. 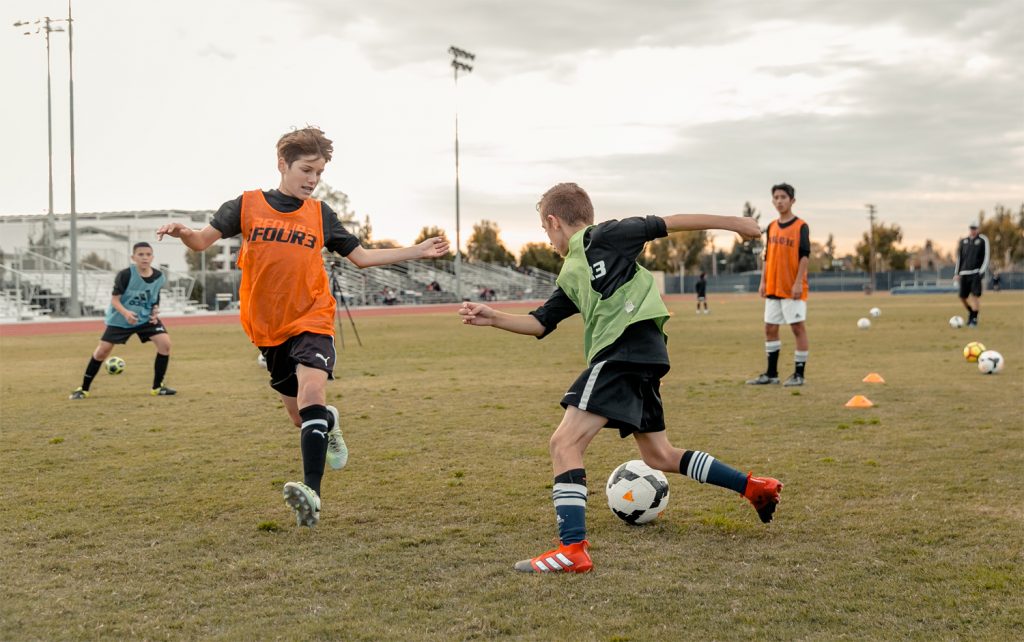 I just mentioned the hardest part of this whole entire thing. I want to make sure to emphasize it.

You need to develop a limited number of exercises. You don’t need come up with 100 exercises. You only need 10 or 15. And you should work on mastering them!

What should they be? Well, you need…

Mastering 10 or 15 exercises that cover those four areas AND fit your vision will be much easier and more beneficial than dabbling with 100 random drills.

We’ll talk about the topic of “mastering” in a future episode.

You have to resist that urge.

You have to reprogram your brain. You have to throw away most of what you’ve learned during traditional coaching education.

You need to do less, not more.

I can’t remember exactly where I heard it, probably on the Tim Ferriss Show, but something that Tony Robbins said in an interview really resonated and stuck with me. It might be slightly out of context here, but I’m going to apply it anyway.

Tony was talking about how our brains are pre-programmed with archaic software. But through training and repetition, we can re-program that software. And before you can attempt to re-program someone else’s, you need to re-program your own brain first.

You, as a coach, have to come to terms with the fact that doing less, not more, is much better for the overall coach, player, AND team development. Then, you and your players will start seeing the massive benefits.

The moral of the story is that to avoid getting trapped in the trial and error cycle, you need to Do Less, Not More.

Subscribe on Apple Podcasts or Stitcher so you don’t miss out.

How to Avoid Getting Trapped in the Trial and Error, Error, Error Cycle [Coaching 02]John Pranjic
Download Audio Subscribe