I spoke with the real Eric Wynalda – the father, the son, then the eventual player, teammate, and manager.

On a rare rainy and cold California morning, he called me as he was dropping his kids off at school. Already a signal this wasn’t going to be your typical podcast.

He reminisced about his first time seeing soccer in Southern California as a child, and admitted he had no clue what his dad was making him watch. He described what captured his attention at a young age, and what stuck with him that created a lifelong love for the game.

Later we discussed his life after playing.

The most important and interesting part of the interview was hearing Eric describe how he sees himself making an impact on U.S. Soccer in the future.

His views on the current state of MLS and the National Team. And what needs to be done in order for the United States to win a World Cup.

My takeaway from this conversation?
Hope.

Because someone with a strong platform is using it appropriately.

Because someone with a voice is not only talking, but yelling, that change must happen.

Because he refuses to be silenced.

We are a soccer nation that is unwillingly, and in most cases unknowingly, trapped inside of a smoke a mirror show. Conversations like this are what give me hope.

Hope … that someday, change will come. 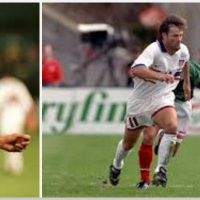