Sometime in late 2015 a Skype call was being recorded unbeknownst to those talking.

As cool and secretive as it sounds (kind of like James Bond 007), I must admit that during the call I came clean and let the guys know they were indeed being recorded. And they were cool with it. Actually, it had been talked about before and that’s why the idea to start recording popped in my head.

The call was between Gary Kleiban, Kephern Fuller, and myself.

As you’ll hear in this episode, even after they knew they were being recorded, they didn’t shy away from talking about things that actually matter.

Gary lays out the long term vision for 3four3. The goals are identified. The stage is set. And after listening to this, all of the 3four3 activity on Twitter and the articles and the player camps and the coaching conferences … it will all make more sense.

That isn’t all, though.

In addition to 3four3 plans, you’ll get a quick glimpse into the world of Joga SC, an American made product that is already getting its feet wet in European waters.

Kephern talks passionately about his interactions with USSF President Sunil Gulati. He talks about the political side of trying to build within a federation that prefers to keep things segregated.

And like Gary frequently writes at the end of his emails … “Keep building!“ 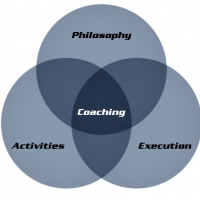 Take a moment and subscribe to 3four3 FM on iTunes.