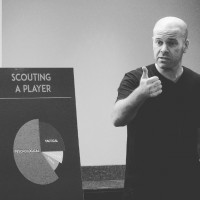 Gary, along with his brother Brian, started 3four3 back in 2009. Since then they have amassed over 300 written articles, hundreds of hours of game and training footage, and thousands of subscribers to their online courses and social media accounts.

Gary frequently reminds me that I was one of the original readers and tells me the story of when I first commented on his then unknown blog. He was getting coffee and remembers seeing a comment notification pop up and saying something to himself like  “someone is actually reading this stuff I write?”

Well, since then, I’ve been lucky enough to have many in-depth conversations with Gary covering topics ranging from soccer to exploring the universe, and everything in between. I’ve recorded a couple of those conversations, some without him knowing. After months of trying to get another podcast recorded and released, we finally did it.

In this episode, Gary opens up a bit. Which is important because it’s easy to forget that behind the screen is a human. Someone who experiences joy and pain just like you and me. Someone who has aspirations, and someone who has fears.

He is an extremely deep thinker. The long pauses you’ll hear between questions and answers are him calculating his next move. The guy doesn’t even order food without fully evaluating the situation around him.

Just to paint the picture for everyone, it was pushing 100 degrees in Southern California that day. Gary and I decided to record on the patio in his backyard. I traveled light with just a backpack, computer, and microphone on this trip. We sat several feet away from each other and you’ll hear the rustling sound as him and I pass the mic back and forth.

If you’re looking for ways to get in touch with Gary, start with Twitter. If you’d like to see more of the work him and Brian have done, check out 343coaching.com. There you can sign up for one of the online coaching courses, or just poke around and watch some videos or read some articles from the past.

Oh last thing, he assures me that if you leave good comments/questions below, he’ll be more than happy to respond. 🙂